Hi! So I am actually glad that I dug into my boxes of books. I just recently moved into my new apartment and I brought maybe ten boxes of books with me. I have been collecting books ever since I was a young child. Yes, I say collecting because at first I would just buy books I couldn’t find in the libraries and then I realized…with the amount of books I have I could start my own library. That’s what I plan to do. I plan to start a library and have the ability to say I’ve read each and every one of them.

Oh yeah, so I dug into my boxes and found a few random gems. His Lover’s Little Secret was one of those gems. I read it while I was at work because it was on of the slowest days possible and the book isn’t a hard read nor is it very long. The characters written in the novel are so deep and complex. You wouldn’t think so if you were to judge it by the fact that it’s a Harlequin but it’s true. Gavin is definitely one of my favorite antagonist ever. He’s strong, matter of fact, put together but not necessarily controlling. Yes, as a CEO he spends a great deal bossing and giving orders but he’s such a sweetheart you forgive him. His true and honest love for his son is every girls true dream in a father for their child. 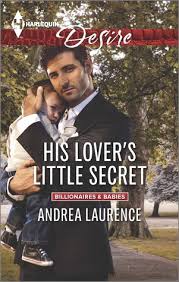 When I read the back of the novel again, I was taken aback for a minute. The story plot is not uncommon and I half expected it to be one of those that irritate every nerve. I hate it when girls call a guy a deadbeat or not a good father but didn’t even tell him that he had a child. It really grinds my gears because they then spend the entire book making demands and statements like “you don’t deserve”, “prove to me…” and “he’s MY child”. It makes me want to reach into the pages, grab the woman by the neck and shake. Knock some sense into them and say “HE COULD’VE BEEN THERE FROM THE BEGINNING HAD YOU ONLY TOLD HIM!” Luckily, I didn’t have to do that this time. Of course, she spent the first few days trying to convince him she was right in not telling him but she redeemed herself by allowing him to be involved.

Andrea Laurence did a great job of bringing it full circle and making them very well rounded. I’M even in love with little Jared! Thanks!! Read to find out if this duo can get it together and how they survive a kidnapping! Love it!

Heya! I love reading and I used to own thousands of books! But I’m a new Minimalist and I donated a few thousand books and as I read my TBR my pile dwindles even further. I am currently a full time student, stay at home mom to a beautiful baby girl, and I'm a writer. View all posts by Jade Beth J

I'd love to hear your feedback! Comment below! Cancel reply

2 months into my dreadloc journey!!! From bun to initial two strand twist to now
Only half make up today. I only wanted to wear eyeshadow but realized how weird it looked without eyeliner, then I had to add mascara, then I had to add highlighter...this is why I don't wear makeup 😂😂
Made the seasoning mix for my chili!!
Pure Love 💘
Was recommended this book last night. It's fantastic!! This is getting really good. I love a good whodunit!! Perfect for reading in my hammock An Unwanted Guest by Shari LaPena
So I just wrote this piece for my creative non-fiction class that reamed me a bit... I might get points taken off b/c its over the word count but once I started i couldn't stop... I put it on my blog: To An Old Roommate, I'm So Sorry Check bio for link Feel free to check it out. #AmWriting #WritersLife #CNF #Me Too #Creative NonFiction #Books #AmReading #Blogger #orlandoblogger