So, remember how a few posts ago I said I will be doing some major construction to the site? Well, I am! Starting with buying a domain name! It’s officially going to be AScholarReview.com! Unfortunately, it did say that it might take 72 hours for to register so don’t be too upset if it doesn’t work right away!

So excited that I thought I’d share that with you guys! I will be making more changes over these next few weeks so be prepared to see some new things arise.

Love, peace and looking towards the future.

I actually don’t know if I’d told anyone this but outside of being a reader i am also a writer. No, I am not some big accomplished author or anything like that but i do write novels. I write romance with an emphasis of many other genres. I don’t really have one set genre that I like to incorporate into my romance, I sort of just go with the flow of that idea.

The last book I finished is actually the first book in a six book series called The Dark Warriors. It’s called Hunter and has actually taken a year for me to write it. It’s taken so long because life sort of…just got in the way. I started the novel after doing extensive research and brainstorming last year, around February 2014. The first novel is called Hunter. At that time I had started a blog called The Yellow Book Project. I decided that instead of writing it to myself, I would upload the book in a series of posts. I guess I mainly decided to do it because I wanted others to see my thought process as the book progressed.

Readers could see my mess ups and mistakes, they could see where I decided to change the direction of the novel or areas that I put more emphasis and focus. I also made posts between that weren’t of the novel. Just sort of updates on my thoughts or on what was going on in my life or excuses (yes excuses) for not uploading the next portion or writers block.

For me, I think it was more of a journey that I took on. During the course of writing this book, I got into a car accident that totaled my last car (I was not at fault!!), I got a new car, I got a part time job out of boredom, I moved from the Midwest to Florida, I moved into a new apartment with roommates, I even discovered a new writers niche! So much happened and so much has changed. I like to believe that I became a better writer over that time but the evidence as to whether that is true is in the posts.

Anyway, I figured I’d share that tidbit with you guys! I finished Hunter in April and began querying. I had initially thought about started the second book in the series, Vectio, but thought better of it. Writing the first book was a commitment and while I’m not afraid of those, I don’t think i’ve matured into the writer that I want to be for this series, just yet. I was reading this interview that really touched my heart a few months ago. The author had said that sometimes it’s not the right time to write a particular book and you need to be able to see when that time is. That’s how I feel about the series. I’m not as focused, interested or immersed into this series as I was in the beginning. I am definitely still going to write it but I don’t want to half ass a series that I know is great just because I’ve already finished one novel. So…in other words, The Dark Warriors series will come to past; I’m just not ready to write it.

I’ve inserted the URL to the blog below! The posts are numbered! Feel free to read however much of it you want and comment! I would definitely appreciate the support, advice or anyone’s thoughts on the story.

So I literally just finished Her Lone Wolf and I must say, it was great. It was definitely suspenseful, as we are working with a serial killer here, but funny too. I wouldn’t say there was any real comic relief, just that there were parts that weren’t as serious that kind of balanced out the book. I actually was inspired by this novel. Before now I hadn’t read anything by Paige Tyler and I’m definitely hooked. I just found out, by searching her page (link below) that it is actually apart of a series. Luckily! It’s the second book. I plan to go back to the book store and see if they have the first and third books in the series. 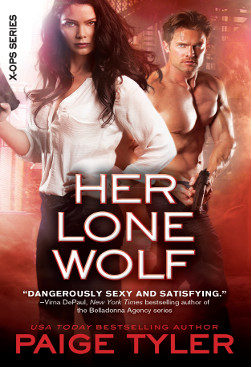 The characters were well thought out. The cadence of the book read very smoothly. I’ve read a few shifter novels in my time and I think this is definitely in my top twenty of favorites. I would put Paige Tyler near my top with Lynsay Sands (not touching but amazingly close). She also played her sup-characters very well. I find that in a lot of novels the characters who aren’t really important or mains fall between the cracks. They aren’t as well rounded, their lines seem forced, we don’t really form who they are in our minds. Tyler describes and widens the spectrum for her sup-characters and that is what inspired me.

I’ve always wanted to be a writer of well researched, beautifully developed and loveable characters. Call me crazy but the twists of the book and the psychosis of the killer really drew me in! Tyler is a fantastic writer and a gathers points in my book for creativity!

I recommend this novel to any romance reader who also likes a little mystery with their love. Looking forward to reading more!

Her Lone Wolf on Amazon

So, I just discovered this bookstore called Books A Million (Link below) via a few of my coworkers. I had been in dire need of  a great bookstore and it seems that Florida isn’t too friendly with Barnes and Nobles. Back home, every mall had a BnN, shopping strips had them and there were even stand alone locations. Here, there aren’t that many! (Unless I’m just looking in all the wrong places). Anyway, so I went and checked it out and surprisingly it was pretty awesome! There were some pretty good selections. I must admit I was a little skeptical at first but then I decided to give it a chance.

I hadn’t really planned to spend any money there and luckily they were having a sale! A Buy Two Get A Third Free type sale. I was beyond excited. The first book that I immediately was drawn to is by Paige Tyler. This is an author I’ve never heard of before! (Inserted author link below!) We shall see!

Hey guys!! A little reprieve from reading.  I figured I’d give you guys a little treat! This is my boyfriend, Tony! He writes music and plays the guitar!

Give it a little listen!

Let us know what you think!

One thing that I noticed about working full time is that it often seems like I never have time to read. When I’m not working, I’m driving to or from work. When I’m not driving or working, I’m eating or sleeping. Any other time is spent with the boyfriend. Ugh, I don’t write or read nearly as much as i want to. Thankfully, I do have a few days off throughout the week and on days that I’ve been scheduled early I can do some quality time by myself.

I have found a new love for cinema as well. I’ve always been interested in movies but the better they get at retelling novels when they go to motion picture the more I’m just…excited. I love all the Nicholas Sparks movies, I love the fiction novels or YA novels like Divergent that have really given me a new look at the transformation.

So yesterday I was given a book on loan by Sherrilyn Kenyon. It’s called Burn of Fury. If anyone has read it please feel free to give me your thoughts on it! I am definitely going to read the novel and write a book review after it. I can’t wait to start it! I would love to hear what you guys think!

This book was pretty great. I actually think it was a breath of fresh air from the recent novels. So far we’ve mostly been dealing with humans or vampires that obviously already knew about the fall of Atlantis and everything that it had to do with the nanos. This time we got a really different spin on how it was told. I believe Lynsay Sands is one of the only authors with a paranormal series that tells back story so vividly. Facts have been checked, questions have been answered and it fits so well into the current story.

Yes, I would say that if you were binge reading (which I’ve done a few times) the series then you might sigh when you realize it most be told all over again. Fortunately, Sands doesn’t tell it the exact same way twice! I didn’t feel compelled to skip over that part! (Which is a plus!)

Sherry, the main character, had a sort of historically feel about her. The way she and Basil interacted kind of made me feel like I was reading a historical romance thrown into modern day. Decidedly, I’m sure that was done on purpose. There was sort of a slow cadence to this book that the others didn’t have. I liked it alot. It didn’t make you want to put the book down, at all. The slower crawl of the book also kept you from feeling like you just binge watched an entire season on Netflix and your eyes are drying out. It made me smile, it made me laugh and definitely there was a little frustration in there also!

I hope you enjoy the book! I definitely recommend reading it!

P.S. The Immortal Who Loved Me is the newest installment in a long series about the Argeneau family. I would suggest starting from the beginning with A Quick Bite, the series is definitely superb!

The Immortal Who Loved Me on Amazon

So, I just completed the new novel in the Argeneau series (as in an hour ago). So tonight I will be uploading a book review after work. It might potentially come out tomorrow for my job has scheduled me for the night shift and I won’t get home until after 1am! Ugh!

Anyway, I look forward to sharing my view of the novel!!